A few days ago, in an effort for the truth the U.S. Department of Homeland Security announced the formation of the Disinformation Governance Board. When Associated Press pressed them for details, they were, according to AP, rebuffed. When asked by journalists the following day, Press Secretary Jen Psaki couldn’t elaborate either, stating, “I really haven’t dug into this exactly. I mean, we, of course, support this effort, but let me see if I can get more specifics.”

It looks like Homeland Security, just like their cousins at the other “security agencies,” decided to move the goalposts without discussing the new idea with too many politicians, let alone those entrusted with legislation. Don’t let that fool you. No matter whether they had input or not, and regardless of which party they belong to, officials will aggressively use the new agency to advance their own agenda. Aggressively, because that’s how politicians work: push a new power as hard as you can, then take a small step back if there is any discernible pushback. 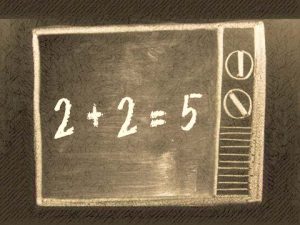 Here is how the Disinformation Governance Board’s job description was eventually defined. As stated by Homeland Security, the department will be empowered to contest disinformation crafted by Russia, as well as disinformation designed to deceive migrants hoping to enter the United States.

Some questions come to mind. No matter what the initial focus of the new information police is and what it will encompass two or three years from now, isn’t it remarkable that the government should add to its job description the task of determining truth? Is there anyone who can’t see that it’s in the nature of governments everywhere to lie routinely, while accusing other governments of duplicity? No wonder references to George Orwell’s 1984 and its Ministry of Truth or the Soviet Union’s infamous Pravda (“The Truth”) are popping up.

Of course, broadcasting manipulated narratives (or “truth”) also involves the suppression of “untruths,” which warrants another discussion. My principal fear is that America’s new information police will further entrench Big Technology’s surveillance and censorship efforts.

The continuous massaging of the pandemic narrative, with the government, actually labelling social media accounts accused of spreading Covid disinformation and Silicon Valley frequently deplatforming such accounts, gave us a stark preview. That model is now being expanded into the realm of foreign policy.

Soon, journalists will not only be told how they should report on China’s pending deal with the Solomon Islands but will be censored or even charged if they consider different perspectives. Consider that if this framework had been in place in the past, we would never have heard American voices opposing the Vietnam War, the invasion of Iraq, the idiocy of occupying Afghanistan or the dispatch of Libya back to the Middle Ages.

Investing in an Age of Deception

Until four or five years ago, I rarely felt compelled to accompany my investment-related comments with political viewpoints. What’s changed is that manufactured narratives have almost wholly replaced well-balanced reportage on every front.

Last week, the New York Times reported that “public health officials have sent confusing messages about Covid policy. They have done so on masks, tests, vaccines and basic Covid statistics. Sometimes, the confusion has been intentional.” Imagine that coming from the Times—the very instrument that helped the government spread its lines. In a recent article, Bloomberg proposed that “the markets are a lot smarter than the central banks would have us believe,” criticizing the Fed’s monetary rhetoric. Another example of journalistic hypocrisy. Yes, central banks’ policy announcements have been devoid of any sense for years, but it’s the media that obediently parrot them.

Arriving at an impartial assessment is a challenge at the best of times. However, the convergence of media and government interests, boosted by a dangerously monopolistic technology sector, makes it all the more difficult. All of this means that, as a society, we can either surrender the search for truth to the government or question what is fed to us by a corporatist-political-media complex as truth. Given the events of the past few years—and even more so, the past few weeks—I’m deeply concerned that such a shift may not be in the cards.

Most people recognize that current trends are alarming but hide behind their party affiliation. Yes, these are grave problems, say the conservatives, but they’re the fault of the liberals. And vice versa. Severe polarization along party lines, not long ago primarily a phenomenon in the United States, is now deeply embedded in most developed economies. The result is a perpetual disagreement between opposing segments of the media complex, at least on peripheral topics. Yet when it comes to key issues, the legacy media of the left and the right miraculously agree. Here is a small sampling of eerily hypocritical narrative convergence:

The stock market has cracked, bonds are depressed, and gold is under pressure. Cash is king again, at least for now. As I wrote in my last couple of letters: in inflationary times, cash is a depreciating asset, but it can be a convenient temporary parking spot. Our robust cash reserve is once again helping us.

To comment on each asset class specifically, I have to once more retreat into the rapidly changing realities. The two-year Covid emergency (and more so the response by governments) has brought monetary and economic challenges that will stay with us for years to come. The war in Ukraine (and more so the reaction from the U.S., Britain and the EU) is now comprehensively changing the geopolitical landscape. In many ways, the two developments feed on each other. An irresponsibly loose monetary policy and reckless government spending triggered massive inflation, which was then accentuated by supply chain problems. Now, price pressures are further aggravated by material shortages. 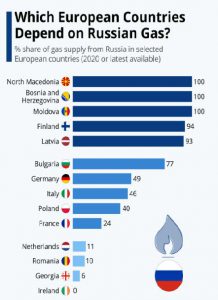 I devoted my last update to the unintended consequences of the sanctions against Moscow, which are now gradually revealed as harmful to both the economy and the concept of a united anti-Russian stand. As I write, the European Union is—in terms of sanctions application—a union no longer. The rhetoric from Brussels sternly upholds sanction dictates. However, nearly a dozen national governments keep buying Russian energy, in some cases openly by paying Moscow in Rubles, in other cases by resorting to oblique monetary acrobatics. On the military front, there is visible discord too. Britain and the U.S. are determined to increase weapons shipments, while numerous European nations are wary of escalation.

In terms of the immediate humanitarian cost, economic consequences and geopolitical impact, the possibilities are endless. My own assessment of the situation is still unchanged from how I portrayed it in previous updates, but that may change.

The bottom line: unless the crisis comes to an unexpected and comprehensive end, I see the U.S. as a temporary beneficiary and Europe as the big loser.

Here is a summary of key implications for each asset class:

Equities
Stock markets have fallen hard. From a technical viewpoint, further downside is virtually assured. Fundamentally, there is much to worry about too. A global economy that has for some time been hurt by pandemic-induced supply chain disruptions and labour shortages is now further weakened by acute material shortages—all while the Fed and a few other central banks are raising interest rates. To be sure, equities could snap back if further evidence of a shrinking economy forced monetary authorities to step back and turn accommodative again—at the cost of even higher inflation.

We cut back our equity exposure a few weeks ago and, for now, are staying the course. Our holdings are primarily in high-quality cash-flow generating companies, in-companies that offer exposure to natural resources, and to a lesser extent in growth proxies. The former two segments have held up very well, while the latter has disappointed.

European and Asian stocks should be avoided. China is in lockdown mode, and social tensions are rising. Japan, a huge importer of raw materials and the most indebted of the developed economies, has seen its currency go into free fall, with horrific implications for inflation and the economy. For reasons already stated, Europe is in for years of socio-economic challenge.

We’re also cautious of emerging market equities. Yes, valuations are depressed, but food and material shortages will cause social and economic upheaval in many nations. Some of those nations are of considerable strategic importance.

Bonds:
As our readers know, we’ve shunned the bond market for the past two years. We believe that downside risk is reduced, as central banks may be forced to abandon plans for further rate increases. Still, with real bond yields still in negative territory, we believe the sector remains unattractive. Any engagement in the bond market should be limited to the highest quality, relatively short maturities and, ideally, inflation protection. Treasury Inflation-Protected Securities (TIPS) may be suitable for a small part of a portfolio. 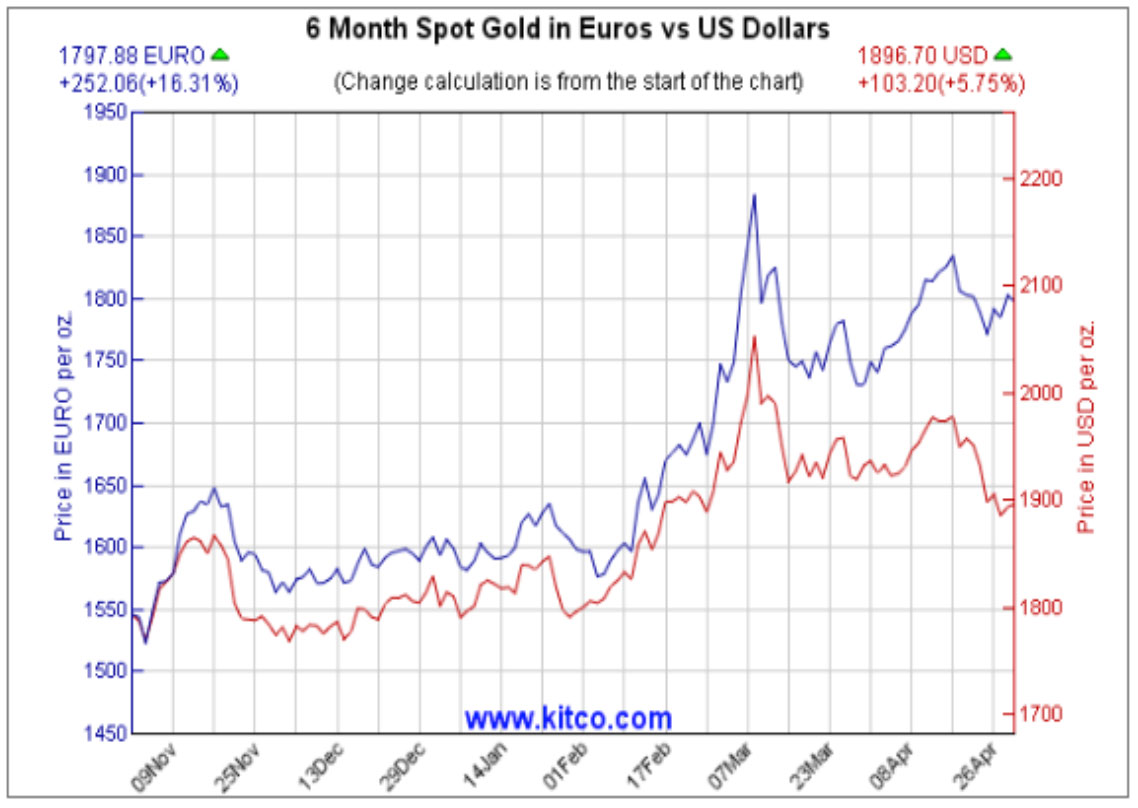 When citizens lose trust in their governments and confidence in markets wanes, gold should shine. Yet, after shooting back up to above $2,000/oz., the yellow metal has fallen back to the $1,865 area. Why?

One key reason for gold’s current correction is that the Ukraine crisis has pushed the dollar sharply higher, while the Fed’s more hawkish rhetoric has created the perception that interest rates are headed much higher.

The chart on the left illustrates that. In Euro terms, gold has gained sharply during the past few months; in dollar terms, less so.

We continue to believe in gold and will add to positions during pullbacks. Major support resides around $1,830. Here is what appeals to us: the metal’s commodity fundamentals are sound; gold (at least in its physical form) is one of the few assets that is not someone else’s liability, and gold has an impressive history as a potent portfolio stabilizer.

All in all, we are in for substantially more volatile markets. That means we should be prepared for multiple outcomes and be nimble. Frequent portfolio adjustments are a must.