by guest writer: Peter Cavelti, Cavelti & Associates Ltd
Demystifying when the Covid threat first emerged, economists the world over entertained us with various forecasts of how exactly the recession of 2020 would play out. Some were quite determined that it would be in a U-shape, while others suggested a W-shaped, L-shaped or K-shaped pattern. Some boldly predicted that the downturn would last a while; the opposite camp thought it would be short-lived.
Such theatrics by our financial experts are once again in play. This time we’re being treated to a broad array of interest forecasts for the year ahead, always served up with great authority. The Fed will raise rates four times, some boldly predict. No, it’ll be only twice, others counter. A third group feels our central banks will not be able to do anything of the kind because the economy would be thrown into turmoil.
Here is a simple truth: no one knows because the ups and downs of the economy are determined not by mathematical models, but by the mindset and behaviour of the crowds. Which makes the outcome unknowable. Of course, central banks can manipulate the timing or the extent of what lies ahead, at least to a degree. Which is what they’ve done for years now. And the result of that: the eventual outcome will be vastly magnified, most likely with horrendous consequences.

So, what exactly are our financial experts basing their brazen forecasts on? Very simply, an assumption that the U.S. Federal Reserve and its cousins abroad will act in one way or another, at a specific time. Given the numerous severe economic and social dislocations in play, we prefer to stay agnostic. Inflationary trends, pandemics, climate emergencies or geopolitical flare-ups will not only influence the central bankers’ actions but may force their hand.
Some readers will counter that monetary policies are only one part of the puzzle—fiscal policies will also play a role. It certainly has done just that in 2021. A quick look at what politicians in the developed economies have spent during the past twelve months tells us that their model is even more unsustainable than the one pursued by the monetary authorities. Trillions of Euros and U.S. dollars have been spent without any coherent long-term planning—trillions that will have to be debt-serviced or repaid through tax revenues and, one way or another, are guaranteed to seriously erode the standard of living we’ve all become accustomed to.

So, what do we see ahead for 2022? Basically, an array of troubling scenarios in which unsustainable policies pursued for decades on numerous fronts demand corrective action. Unfortunately, the much-needed measures are unlikely to be taken, mainly because governmental and corporate powers are benefitting from the embedded structural deficiencies. In functioning societies, governments’ role is to reign in corporate power when it interferes with social stability and wellbeing. A quick look at how real wages have stagnated for decades, how income and wealth disparities have grown, or how tax revenues are continuously misallocated, confirms that today’s political class is made up of lackeys in the service of their corporate ventriloquists.
U.S. CONSUMER AND PRODUCER PRICES 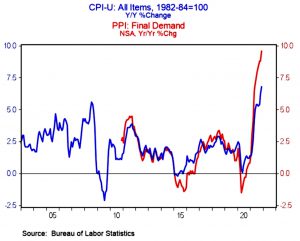 To comprehensively change things catalysts are needed, and of those, there is no shortage. Take the pandemic, which has pushed the economy on a roller-coaster ride and heightened social tensions. Or the sharp rise in inflation (the full brunt of which still has to be felt), which will heighten awareness of social injustice like nothing else could. We’re also worried about America’s last-ditch effort to perpetuate the post-war world order: the likelihood of a confrontation with China or Russia has dramatically increased during the past year.
There are other sparks that could unleash chaos: cyber-attacks, terrorist strikes or natural disasters.
The question that keeps resurfacing: what exactly will the Fed and other central banks do? Leave interest rates alone and see inflation rise further, which may cause massive social upheaval, in addition to incentivizing even greater speculation and fiscal imprudence? Or counteract inflation by reducing support operations for financial markets and rising interest rates, which would heighten recession risks—another cause of social trouble. We no longer see any practicable answer to the mess that years of misguided policy have left us with, and we notice we’re not alone.
Portfolio Strategy
What to do? When the solution to a given problem is unknowable, it’s imperative to prepare for a variety of outcomes. That, in my opinion, is once again the challenge for the year ahead.
Going into 2020 we adopted a defensive strategy, entering the year with a sizeable cash position and a hedge in the form of gold. Our caution resulted in underperformance relative to key stock indices but still left us with a comfortable return. Approaching 2022, we are making only a few adjustments. We continue to be concerned about the stock market. As the chart below illustrates, the past 12 months’ capital flows into equities exceed the combined inflow of the previous 19 years! Margin debt is at historically high levels, while market breadth is atrocious and valuations are high. We remain wary, believing that stock selection will increasingly be the key to good performance.
2021 EQUITY INFLOWS EQUAL THE PREVIOUS 19 YEARS! 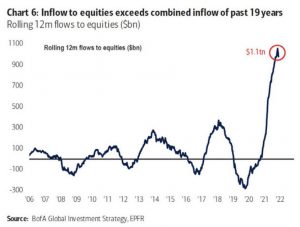 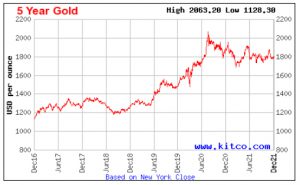 Bonds are an asset class we have for some time shunned, mainly because yields are highly unattractive and the fiscal position of most issuers is poor. We do park portions of our respectable cash hoard in high-quality, short-term facilities that offer high liquidity—regrettably at very modest interest rates.
As the year draws to a close, the gold price in Canada is still struggling near the US$1,800 mark, which is a disappointment to many. While we’re surprised at the yellow metal’s sluggish behaviour, we remain confident. One reason is that, in the period preceding 2021, gold was one of the top-performing asset classes. After a gain of considerable magnitude (40% during the past three years), some consolidation is justifiable. What’s important now is that gold can hold above key support levels and maintain its uptrend. We believe the conditions for that are firmly in place, which is why we continue to stay the course.
Finally, we maintain a series of other hedges, mostly in the form of materials that should benefit from supply-chain disruptions and inflationary trends. We also hold a small exposure to the cryptocurrency and blockchain space, where we’re closely following developments.